Carmaker Ford celebrated a triple win at the 2017 Middle East Car of the Year awards (Mecoty) as its Edge, Ranger and Figo models all picked up prizes at the ceremony in Abu Dhabi, UAE.

A 15-strong panel of judges made up of expert car journalists from the region named Ford’s Edge the Compact SUV of the year. The Ford Ranger won Best Midsize Truck and the Ford Figo was named Best Hatchback.

Now in its fourth year, the Middle East Car of the Year awards is regarded as the most important set of awards in the UAE’s automotive industry.

Judges praised the Ford Ranger for its rugged design and comfort, citing its DuratorqTDCi diesel engines as fuelling its excellent performance capabilities. 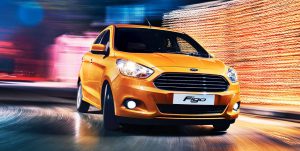 The Ford Figo is another popular car with drivers in the Middle East, enjoying a significant five-fold rise in sales in Saudi Arabia in 2016 thanks to its excellent safety record and use of smart technology.

“Seeing that the region’s industry experts at Middle East Car of the Year Awards have named three different Ford models as best-in-class in 2017 is testament to the great vehicles we are producing year on year.”