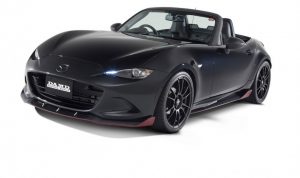 Mazda’s MX-5 creations are generally a highlight, unapologetic Miata junkies that we are. This year’s cars are just as exciting as the past years’,  Both SEMA MX-5s were designed and built in-house at Mazda’s Irvine design studio.

This year’s Speedster is way lighter than it was before. Mazda carved 100 pounds out of it, to make it a staggering 350 pounds less than a production soft top model. It’s also been repainted in a color called “White Ether”, which  looks like the “Blue Ether” paint job on last year’s highly reflective Speedster minus the blue tint. Mazda will probably never sell a roofless Miata or anything this lightweight, but maybe it should.

Of course, both concepts will be fully revealed at the show next month in Las Vegas. Stay tuned for a dose of concept Miata hotness.

BMW looks to the future of motorcycles
Scroll to top