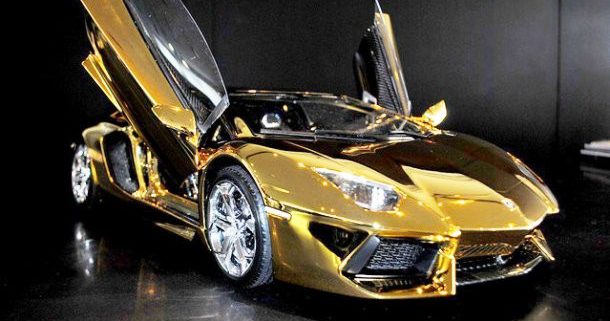 The city of Dubai is home to 26,000 people who have a net worth of more than a million dollars. As a result, there is something of an arms race between the city’s many wealthy residents concerning who can turn up in the most extravagant luxury car.

Famously, Dubai’s streets are bristling with high performance supercars and lavishly upholstered luxury sedans. However, for the ultra rich, it isn’t enough just to buy a fancy car. The next step is to customise some of the world’s most exclusive cars in order to create something that is uniquely opulent.

Here are some of Dubai’s most astoundingly expensive cars:

The Lamborghini Aventador sells for a not insubstantial $310,000. However, this version is worth an astonishing $4.7 million, due to the fact that it is constructed from platinum, gold and gem stones. Even more astonishing, given the price tag, is that this is not a car that you can drive to the shops. It’s actually a model that has gone down in history as the most expensive remote controlled car ever.

Given the extraordinary preponderance of supercars in Dubai, the police force require something that is a bit quicker than a standard hatchback. To this end, one of only 77 of Aston Martin’s One-77 hypercar will find its way into the hands of the Dubai police. This car, which is the fastest Aston Martin ever, retails for an eye watering $1.4 million.

This 49 feet long, custom-built vehicle can carry 23 passengers at a speed of up to 255 km/h. It was built for a Dubai sheikh and looks like a stretch Lamborghini. The car is worth an extraordinary $10 million, which makes it the second most expensive car in the world.

Where gold plated cars are ten a penny, it was inevitable that someone in Dubai would take things a stage further. This Mercedes Benz SL600 has been coated in 300,000 diamonds to make it one of the world’s most in-your-face expressions of wealth.