In a city where it seems there is a cool car at every corner, perhaps it is only fitting that the police are getting in on the act. The newest addition to the fleet of Dubai’s police force has been confirmed as none other than the BMW i3 Electric super car. 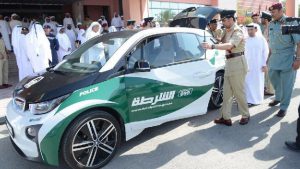 The Dubai Police has form in terms of its taste for super cars of distinction – it already has a Porsche 918 Spyder and Bugatti Veyron in its ranks. Now, in keeping with the green initiatives which has seen electric charging stations pop up in the city, Dubai Police have announced a cleaner, but still desirable, model will be used to carry out duties.

The government got in on the act at a launch event for the vehicle, held in Dubai’s financial district. Suhail Al-Mazrouei, the United Arab Emirates energy minister, described how the acquisition was in line with efforts to ensure at least 10 per cent of all government vehicles are electric. The initiative itself is part of a wider scheme to slash CO2 emissions over a four year period by 15 per cent. 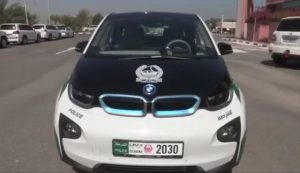 It has been suggested that high speed pursuits are one of the reasons why Dubai Police is under pressure to equip itself with high powered vehicles. Known as a forward thinking city, the steps taken by Dubai’s police to embrace sustainable technologies should certainly be applauded, and positions them as one of the world’s progressive thinking forces. A Car Free Day which was held in Dubai this year succeeded in persuading no less than 60,000 people to not use their vehicle, using other methods of transport including the metro system.

The pure battery version of the BMW i3 is capable of completing a distance of 200 km. It came away with the Best Urban Car prize during the most recent World Car of the Year awards. Using a DC charger it takes only 15 minutes to give the car full battery, which could be welcomed by a busy police force which needs its vehicles fuelled up and ready to go.