Nissan have released the all-new Pathfinder, and it’s had a bit of a makeover. Originally a failed experiment by Mazda, the Pathfinder was only produced in Burma for ‘official use’. Without even bothering to make any Pathfinders in their home of Japan, Mazda eventually decided to ditch the Pathfinder and pretend that it never happened. That all changed however in the mid-1980s when Nissan decided to get in on the act with their very own Pathfinder. Such was Mazda’s embarrassment concerning the original Pathfinder, that they didn’t even object to Nissan stealing the name wholesale. 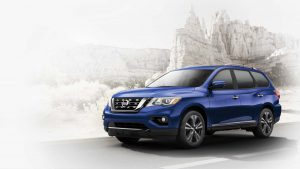 The stolen name had no impact on the success of Nissan’s Pathfinder and the SUV is currently in its fourth generation. The most recent update is the mid-life update, which is scheduled to arrive in the UAE this month. Those who are looking to purchase luxury cars are probably not going to be interested in the Pathfinder, but the SUV definitely has a mid-range audience thanks to its reliability. Nissan have announced that prices will start at AED 119,000, which will get car buyers the basic spec, two wheel drive Pathfinder. For those willing to stretch their budget, the top-spec, all-wheel drive version is available for AED 169,000. 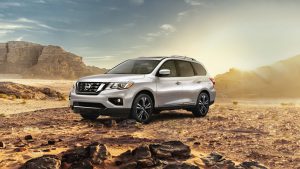 The makeover is pretty comprehensive, there are new taillights and rear bumpers, and there’s also a redesigned bonnet and front bumper. The grille has also been revised and Nissan have even updated smaller details such as the fog lights and the mirrors which now have integrated indicators. They’ve paid attention to some practical details too, a simple wave of the foot whilst it’s under the bumper will make the bonnet lift up and inside the SUV buyers will find that the Nissan comes with an 8-inch touchscreen display as standard.

Under the bonnet there’s a 3.5-litre V6 which has been fine tuned to boost the horsepower by 7 per cent, and Nissan have also stated drivers can expect to experience more torque than previous versions. The all-wheel drive system which is available on the higher-spec models has selectable modes such as 4WD lock mode, and there’s hill-start assist available too.