Six years after the enormously successful Range Rover Evoque hit the market, the British marque has unveiled its next future star: the Velar. Created to rival the Porsche Macan and BMW X6, the new model looks set to sell in big numbers. Priced from just over 200,000AED – although, as ever, a few minutes with the options list will boost that price considerably – the Velar sits in the middle of the range. It resembles the 275,000AED Range Rover Sport more closely than the Evoque, with sleek, futuristic styling and a luxurious interior. It’s only a few centimeters shorter than the Sport too. 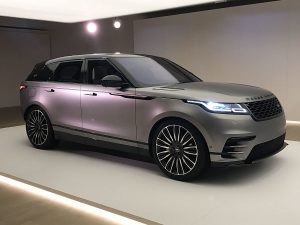 A wide range of engine specifications will be available. Drivers conscious of their environmental footprint can opt for a four-cylinder diesel, which produces 178bhp but only 142g/km in CO2 emissions. There’s a V6 diesel which delivers 296 bhp and a 0-60 time of 6.1 seconds, while the petrol option is a full-fat, 3.0 supercharged V6 which produces a massive 375bhp. The most powerful engine will take the Velar from 0-60 in just 5.3 seconds and all the way on to 250kmph. It will, however, cost around 380,000AED for this model, well above the entry-level price for the Range Rover Sport and the Range Rover.

It promises to be an extremely versatile machine, sharing both the bling factor and the off-road capability of its bigger brother. Even the most basic model comes with 18-inch alloys, key-less entry and heated seats. It will be at home in the dirt too, able to wade through more than half a meter of water.

Inside, the toys include two HD touchscreens and an all-new infotainment system unique to Land Rover. You can use the screens together or separately, while there’s also the option to purchase a full-color head up display. It’s a clever car; the Velar can be programmed to follow the vehicle in front at low speeds and will apply emergency braking in the event of an imminent accident.

Due on sale in 2018, the Velar is available to pre-order from Land Rover dealerships today.

3 cars perfectly suited to the UAE climate
Scroll to top