As we have already discussed in previous blogs, the 2017 Geneva Motor Show looks set to be one of the most eagerly anticipated events of the year. Not only will DS be rolling out their new models, Porsche will be displaying their 2018 Panamera and Mercedes are expected to reveal their latest AMG GT concept. 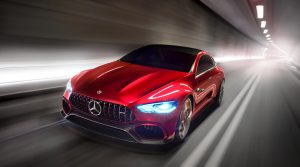 The images and details we do have on the latest AMG offering suggests that it will almost certainly be targeted at buyers of the Porsche Panamera and perhaps the BMW 6 series, but a road version of this GT concept is unlikely to be with us until 2019. The question is will new luxury car buyers be tempted by a vehicle they will not be able to purchase for another two years?

The GT concept is certainly a handsome beast, indeed it would need to be when sized up against the Panamera; the classic coupe shaped four door chassis and shapely rounded rear certainly looks moody enough. As to whether it will stand up against the F1 styled GT hypercar announced not long ago is perhaps a debate that will surface some time soon.

The 4 litre V8 engine and huge diffuser at the rear of the GT concept is suggestive that performance will be a key selling point of the model, while the increased use of aluminium and high strength steel is likely to considerably reduce the overall weight of the car. We can therefore expect improved handling and drive quality as well as economy. There is expected to be a choice between two engine models including the S 4matic+ and the E63 S 4matic+, which was capable of kicking out over 600bhp. 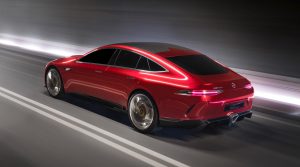 The AMG is expected to have the V8 engine run alongside an ISG (integrated starter engine) allowing an increase of 20bhp in short bursts and a seamless ability to stop-start. The ISG contains a 48V system that is likely to be accompanied by a lithium ion battery which, if this is the case, would represent some interesting developments within that field.

AMG seem to be able to do nothing wrong right now, their sales figures show that they are taking a considerable bite out of the sales of similar cars such as Porsche and BMW. Their existing 31 different models are set to increase to 48, but with that rate of expansion comes a risk of taking their eyes off the ball. The AMG GT concept is an exciting looking car at this stage, but whether it will help keep AMG ahead of the game remains to be seen. We should know a lot more after the 2017 Geneva Motor Show. 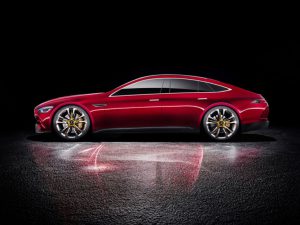 The Range Rover Velar is here. And it’s going to be a big hit
Scroll to top