The residents of Dubai are no strangers to unusual cars. Wealthy sheikhs will always find new ways to make their exotic toys stand out from the pack – whether that’s an enormous, six-wheeled Mercedes G-Wagon, a gold-plated Lamborghini Aventador or an ultra-rare, jet black Bugatti. 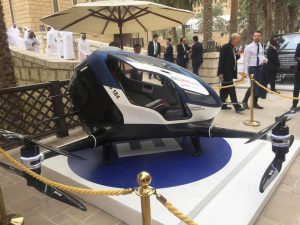 But soon there could be some even more arrestingly eye-catching machines on the roads of the UAE: flying Uber taxis. That’s right, the revolutionary San Francisco-based tech start-up has nominated the emirate as one of only two places in the world – the other being Dallas, Texas – where it plans to turn its futuristic vision of airborne cars into a reality.

The benefits of flying taxis, according to Uber, are clear – reducing congestion and pollution on Dubai’s busy streets, vastly decreasing journey times across and between cities, and making better use of space that would usually be used to park conventional, non-airborne vehicles.

It’s no surprise Uber chose Dubai over, say, Shanghai or London. The Arab city is known for embracing the opportunity to adopt the newest transportation technology, with plans in the pipeline for one of the world’s first Hyperloop tracks and even jetpacks for firefighters.

The plan is more realistic than it may first appear. Uber attracts vast amounts of funding from outside investors and has so far dominated almost every market it has entered. The firm remains a software company as opposed to a taxi service or a vehicle manufacturer. The expectation is that Uber will partner with various other aircraft and infrastructure manufacturers who will build the aircraft themselves, the docking ports, the charging stations and so on. Uber will simply develop the technology to dispatch the flying cars to and from their destinations, likely cashing in on sizeable profits along the way.

There are, of course, logistical and regulatory hurdles to overcome, with the skies over Dubai already overcrowded, but Uber plans first to work with the USA’s Federal Aviation Authority (FAA) to devise legislation enabling the flying cars to operate in Texas. The Dubai authorities could then follow suit and emulate the legislation.

Uber’s plans are ambitious, and right now, they’re still up in the air. But that might change very soon.