Car manufacturers from Skoda to Rolls Royce are falling over themselves to grab a slice of the SUV market. Which new cars will they tempt us with this year? 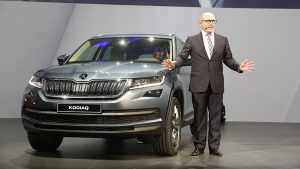 Big car news is the arrival of Skoda’s first SUV. Better equipped than any previous Skoda, the Kodiaq has been praised as an exceptional tow-car in reviews and will be cheaper than all its rivals in the mid-sized SUV sector. Car buyers could choose this new Toyota, more of a cross-over than a pure SUV, which is expected early in 2017. Radically styled and well equipped, there’s a hybrid or a small turbocharged petrol engine and a choice between two or four wheel drive. SEAT’s first SUV will be based on the same Volkswagen platform as the new Ibiza. With a minimalist cabin and stylish exterior, there’s likely to be a souped-up Cupra version later on. Of all the luxury cars arriving this year, none is more of a surprise than an SUV from Alfa. The sportiest-looking 4×4 ever, it’s doubtful that sofas will fit in the back of this one.

Built to take on the Audi Q5 and BMW X3, it’ll probably handle better on the road.

Then there’s more temptation coming your way, after the 2017 cars have been and gone… A new brand developed by Chinese company Geely, using the skills and facilities of its Volvo subsidiary, Lynk & Co’s strikingly designed first SUV will be called the 01 and is due out in 2018. Then the long-awaited replacement for the original Land Rover – the new Defender – is expected in 2018. It will retain its predecessor’s iconic shape but with the modern design cues seen in the Evoque and new Discovery.

But the company is insistent that it will retain it’s superior off-road capabilities rather than follow the “soft-roader” trend of its competitors.

And for those interested in real luxury cars, the world’s most expensive SUV, the Rolls Royce Cullinan arrives in 2019!

There are definitely some exciting cars coming soon, if you can wait.

Can China compete in the market for luxury cars?
Scroll to top