Every now and then new nations enter the international car market, with varying degrees of success. The Chinese are now trying – will it work?

In the Seventies, it was Eastern Bloc cars like Skoda, Lada’s version of the old Fiat 124 and the Russian Moskvitch 1500. Twenty years later the Malaysian Proton and South Korean Kia, Ssangyong, Daewoo and Hyundai brands appeared.

The offering to international car buyers was always one of low price, with lower quality and equipment levels, sometimes even lower safety levels. This makes it hard to sell luxury cars
under these brands – Skoda and Hyundai are perhaps on the way to pulling it off, but not yet.

The Chinese have approached the international car market in a different way because they have access to greater finance.

They can buy existing companies with high levels of design, manufacturing and marketing expertise which makes it easier for them to access international markets.

Which new cars are Chinese?

Volvo, the Swedish company with a reputation for safe, high-quality cars, was been bought by Geely. Chinese company SAIC, which makes the Chevrolet Cruze for sale in the USA, also bought the remains of British company MG.

After a lull brought on by the international credit crisis, SAIC is now selling British-built cars as MG Motors, but it’s uncertain if that brand will sell well across the world. 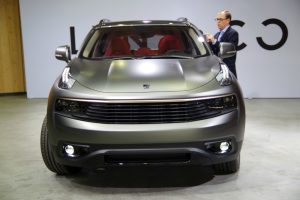 But perhaps the most interesting move is from Geely: launching a new global brand called Lynk & Co using Volvo expertise. The first car from the new brand – the 01 – is a strikingly designed, high-quality SUV, loaded with technology.

Privately-owned Chinese car companies like SAIC and Geely have to be successful internationally as they are less competitive in China than subsidized government-owned manufacturers.

So the Lynx & Co initiative is very important – delivering new cars that aren’t perceived as budget cars and have the quality associated with Volvo.

The 01 will be one of the new cars 2017 will bring to the attention of international car buyers – will it succeed?

Open facebook page now
Join our Facebook community
Which new SUV will tempt you in 2017 and beyond?