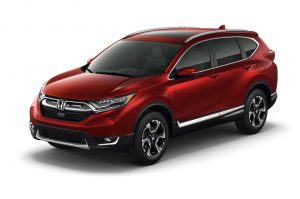 Honda have been a little slow in releasing new cars in the UAE of late, but that all looks set to change with the latest set of car news from the Japanese company. After showing off the 2017 CR-V models last year, they have finally arrived in the UAE and are now available for those who up until now had been waiting patiently for them.

Unfortunately, there is a bit of a catch concerning the models that will be for sale in the UAE. For those who were expecting a 1.5-litre car complete with a turbocharged four-cylinder unit and 190 horsepower, we have some bad news, those models are not going to be available. Instead, UAE customers will be able to get their hands on the 2.4-litre version.

There is, however, plenty of good news about the 2017 CR-V models starting with the fact that CVT transmissions will come as standard across all the cars. Customers will also get the choice of front-wheel or all-wheel drivetrains. 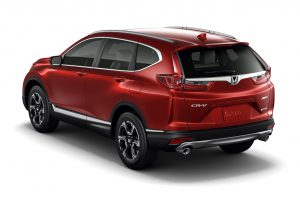 Also on offer to residents of the UAE is the choice of nine different exterior finishes. This kind of choice isn’t available in other markets, although if Honda’s history is anything to go by, it’s highly likely that the white and silver finish will be the most popular option. If however, you’re after something more original, other finishes include everything from dark blue and red, to olive green. Stepping inside, there is a black and ivory fabric available and there’s also the option of having a leather trim added.

The 2017 CR-V models have been completely refreshed and Honda have clearly put the work in when it comes to ensuring the 2017 versions are more than just an update. There’s LED lights which will now come as standard for the headlights. Car buyers can also expect to have both 17 and 18-inch alloys as an option and there’s also a brand-new instrument panel. 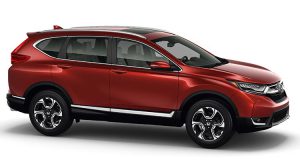 Previous models of the CR-V had drawn some criticism for the amount of rear legroom available, but for 2017, Honda have stated that it will have the ‘best rear legroom’ in its class.

Finally, for those who have their eye on the EX and Touring versions, there is some good connectivity news. Honda have fitted a 7-inch display which promises to have Android Auto compatibility as well as Apple CarPlay.